A Brief History of the Biggest Stock Market Crashes

How the biggest stock market crashes and bear markets in history changed our financial lives forever.

by Ronald Kaufman
in Guides 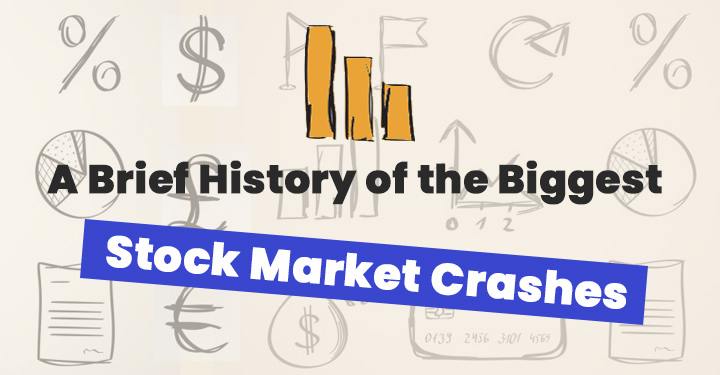 While the warning signals of a stock market collapse are usually apparent in hindsight, no one can predict when one will occur or even define it precisely. Crashes in the stock market are rare, but they change our financial lives forever when they happen.

What Is a Stock Market Crash?

What Causes a Stock Market Crash?

Despite the common association, crashes and bear markets do not always happen together. The characteristics of panic selling and a steep drop in prices differentiate stock market crashes from bear markets. Bear markets refer to seasons of falling stock market prices that last for months or even years. For instance, the 1987 Black Monday did not trigger a market crash. Similarly, the bubble in the value of Japanese assets gradually deflated over many years rather than a single sharp decline.

From the earliest to the latest, the following is a brief overview of history’s ten major stock market crashes, highlighting the causes, consequences, and aftermath.

The panic of 1901 is the first stock market crash on the New York Stock Exchange. It is famously dubbed “the rich man’s panic.”

The Panic of 1907 is the 8th largest decline in U.S stock market history. It is also known as the 1907 Bankers’ Panic or Knickerbocker Crisis. Beginning in mid-October, the New York Stock Exchange saw a steep decline of about 50% from its high the previous year, triggering the financial crisis known as the Panic of 1907.

The crash on Wall Street in 1929 is also known as the Great Crash. Considering the impact, it represents the worst economic decline in the history of the U.S. stock market. The Great Crash is widely associated with October 24th, 1929, known as Black Thursday, and October 29th, 1929, known as Black Tuesday. Black Thursday is the day of the largest share sales in U.S. history. Black Tuesday refers to the day when about 16 million shares were traded on the NYSE in a single day, causing the Dow Jones Industrial Average to plummet by 25%. According to many sources, the Wall Street Crash paved the way for America’s Great Depression of the 1930s.

From January 1973 through December 1974, the stock market was in a bear market due to the crash of 1973-1974. It was one of the greatest stock market downturns since the Great Depression, affecting all global stock markets, especially the United Kingdom.

Black Monday occurred on October 19, disturbingly close to the 58th anniversary of the 1929 crash. Due to the time difference, the day is known as Black Tuesday in Australia and New Zealand. Twenty-three of the world’s largest stock markets all dropped significantly in October 1987.

In Japan, the decade after 1992 is known as the Lost Decade because of the slow-moving impacts of the asset bubble collapse. Since Japan’s GDP in 2017 was just 2.6% greater than it had been in 1997, with an annualized growth rate of 0.13%, the “lost decade” finally became the “lost 20 years.”

In the late 1990s, economic turmoil swept over most of East Asia and Southeast Asia starting in July 1997, as the value of the Thai bhat plummeted. The crisis started in Thailand, known as the Tom Yam Kung crisis. Because of the IMF’s participation, “IMF Crisis” has become a common way of referring to the Asian Financial Crisis among nations that were touched by it.

The dot-com bubble is also known as the dot-com boom, the tech bubble, or the Internet bubble. During the boom, individuals invested at record levels, and tales of people leaving stable employment to pursue stock trading were common. Stocks in 12 major companies increased by over 1,000%, with chipmaker Qualcomm’s shares increasing by almost 2,500%.

The 2007–2008 financial crisis, sometimes known as the Global Financial Crisis (GFC), was a devastating economic downturn felt throughout the globe at the turn of the 21st century. Most severe financial crisis since the Great Depression (1929), more than $2 trillion was wiped out of the global economy, making it one of the top five worst financial disasters ever. In total, the market rebounded in about 17 months.

After mounting instability due to the COVID-19 pandemic, financial markets throughout the globe plummeted unexpectedly on 20 February 2020. As of April 7, 2020, it was over.

How to Prepare for a Stock Market Crash


The phrase “stock market collapse” is dreaded among investors. No one prays for it to happen. However, if history is anything to go by, preparing for a stock market crash is an intelligent move for an investor. You can take steps to fortify your finances in times of volatility and uncertainty.

What is the October effect?

The October effect is the unfounded belief that stock markets perform poorly in October. However, as most data contradict the October effect, it is generally accepted that it is more of a psychological anticipation than an actual event.

What is the roaring twenties?

Did the 1929 stock market crash cause the great depression?

Does a stock market crash have benefits?

Although they inflict much short-term suffering, stock market crashes may leave good legacies. For instance, the Federal Reserve, the Securities and Exchange Commission, and the Federal Deposit Insurance Corporation (FDIC) all came into existence due to stock market disasters in the United States. Also, despite the crash, the stock prices of companies that compete with the impacted companies may go up.