The stock of Tesla (TSLA) has undergone a 3-for-1 split.

Shares of Tesla (TSLA) finished the day’s trading at $891 on Wednesday, August 24. Shares opened the following morning, costing around $302 per unit.

Shareholders tend to be enthusiastic about stock splits. At the very least, it’s wonderful to feel like you’re receiving a freebie. However, just because a stock split doesn’t imply investors are receiving a better deal. 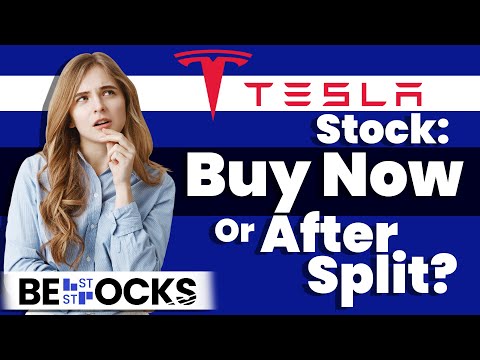 Stock Split: What Is It?

When a corporation wants to enhance the trading volume of its stock, it will often conduct a stock split to do so. A stock split may increase outstanding shares by a certain multiple, but it does not affect the firm’s value as a whole.

2-for-1 and 3-for-1 are the most typical split ratios (sometimes denoted as 2:1 or 3:1). Therefore, each pre-split investor will end up with two or three company shares following the split.

Why Do Companies Split Their Stock?

When a company’s stock is split, existing shareholders get more shares than before, depending on a predetermined ratio. Splitting stock is a common strategy used by companies to make their shares more accessible to investors at a lower price and to boost trading volume.

Most investors would rather buy 100 shares of a stock selling for $10 each than one share selling for $1,000. Many publicly traded firms thus resort to a stock split after the share price has grown significantly. Even if a stock split increases the total number of shares in circulation, the monetary value of those shares is not affected in any way since the firm’s value is not altered.

The board of directors of a corporation may decide to split the shares at whatever ratio they see fit. A stock split may be 2-for-1, 3-for-1, 5-for-1, 10-for-1, 100-for-1, etc. There will now be three shares available to shareholders for every original share. That means there will be three times as many shares trading as before.

However, following a 3-for-1 stock split, the stock price will be calculated by dividing the previous share price by 3. This is because market cap doesn’t change after a stock split.

Why Did Tesla Split Its Shares?

Many industry watchers believe the Tesla stock price will drop due to the split.

With the 3-for-1 split, Tesla stockholders have received even more excellent news. With the support of Sen. Joe Manchin (D-W.Va.), significant tax incentives for Tesla vehicle owners may become available in the United States Senate under the Inflation Reduction Act of 2022. Once a manufacturer had sold over 200,000 electric cars, the existing credit was gradually reduced. However, Teslas and GMs would both be eligible for the credit if this law passes.

Which Way Does Tesla Stock Go After a Split?

While Tesla stock surged over 81% in the two weeks after its 2020 stock split, it fell about 8% in the days after the announcement of its 2022 stock split. On August 24, they were still down a little, dropping much more in a day or two following the split before regaining a little.

Given that no one has a perfect predictor of the future, it is difficult to predict the stock’s performance in the following weeks and months. However, it is reasonable to argue that the majority of the effect of the split has been “baked in” to the pre-split market price. This means that savvy traders factored in the split when buying and selling Tesla shares.

Most experts agree that the lower price might entice more investors to purchase Tesla shares, which is the company’s stated goal. Because of the split, several investors have raised their price estimates. Yet even the most optimistic investors are placing more weight on current market trends and the firm’s stability than on the stock split itself when making their projections. Fundamentals are also of primary interest to bearish analysts.

Timeline of the Tesla Stock Split

According to a proxy statement filed by Tesla earlier this year, the company divided its shares so that all employees could benefit from ownership at a lower price. In addition, the market price might be changed to allow more workers and investors to buy Tesla shares.

“Since our stock split in August 2020 to June 6, 2022, our stock price has risen 43.5%. While this value appreciation has led to our employees benefiting enormously through the years, we want to ensure all employees, regardless of their joining, have access to the same advantages.”

In addition to making the common stock more available to retail shareholders, Tesla said in the release that it would give workers more control over managing their equities. This, the company believes, would assist in optimizing shareholder value.

The Tesla shares split a few years ago, so keep that in mind. In August 2020, Tesla’s shares were divided 5-for-1. So the electric car manufacturer has divided its shares twice in as many years.

Some Notable Stock Splits in 2022

Other significant stock splits occurred that year as well. Companies other than Tesla also had stock splits in 2022.

From May 27, 2022, Shareholders of record will benefit from a 20-for-1 stock split declared by Amazon’s board of directors in March 2022. Shares of Amazon are now trading for more than $2,000 due to the company’s rapid and sustained growth over the last few years. With the split, the per-share cost will drop to slightly over $100. On September 1, 1999, Amazon conducted a 2-for-1 split of its stock.

In addition to reporting profits for the fourth quarter of 2021 in February 2022, Alphabet has announced a 20-for-1 stock split. So on July 15, 2022, for every share of stock held on July 1, 2022, shareholders of record will get nineteen extra shares. The last time the firm separated was in early 2014, just before it officially changed its name from Google to Alphabet.

Shopify announced new bylaws in April 2022 that would put CEO and co-founder Toby Lütke in control of the company’s voting system. The business also said it would perform a stock split of 10-for-1 on June 28, 2022, for stockholders of record as of June 22. As part of its strategy for sustained expansion, the e-commerce software maker hopes to broaden access to its stock. Following its initial public offering (IPO) in 2015, this will be the first stock split for Shopify.

In March of 2022, DexCom, a maker of blood-sugar-monitoring equipment, announced a 4-for-1 stock split. As a result, new stock was issued on June 13 to shareholders of record as of May 19, 2022. DexCom has never done a stock split before; therefore, this is a historical event.

When publishing its financial results for the fourth quarter of its fiscal year 2022 in August, cybersecurity industry leader Palo Alto Networks said it would launch a 3-for-1 stock split. The split was finalized on September 13, 2022, and the new pricing was introduced the following day. In the past, Palo Alto Networks has never before divided its shares.

Tesla has been prohibitively expensive for most ordinary investors for some time now, with its stock price nearing $1,000 per share. This should all change after the 3-1 stock split, encouraging more individual investors to put money into the business.

Existing shareholders benefit from this form of ownership, but new investors will need help gaining access to Tesla shares. With a 3-1 stock split, smaller investors can own a piece of the electric car industry leader.

In August, Tesla’s shares split 3-for-1. However, the stock has yet to begin a fresh uptrend. Why? The overall market for EVs (electric vehicles) has dropped. Investors were concerned about the effect that rising prices and disruptions in the supply chain might have on their companies.

Additionally, shareholders were unhappy when CEO Elon Musk sold 19.5 million shares around the time he acquired Twitter. And they were concerned that his time on Twitter might cause him to neglect Tesla. Challenges arose for Tesla in the company’s third fiscal quarter. The rising cost of commodities and a stronger currency are two examples (that lowers the value of sales made outside of the U.S.).

However, there are many reasons to appreciate Tesla and have faith in the company’s future. Despite the challenging environment, Tesla managed to post record sales and operating profit. Also, the electric vehicle industry leader had an operating margin of 17.2 percent.

More than 343,000 automobiles were sent out, a 42% increase from the previous year. The firm also restated its commitment to a yearly delivery volume increase of at least 50%. Tesla has sufficient cash to fuel its expansion in the years ahead. The amount of money available to the business has grown each quarter. Also, cash on hand increased by 31% year-on-year in the third quarter, reaching nearly $21 billion.

The current price of Tesla stock is 44 times the company’s estimated profits for the following year, 2023. This number was down from 70 a few short months ago. Considering the company’s recent earnings progress, Tesla’s stock is a buy at the current price. And this split may cause the stock price to soar next year and beyond.

Should You Buy Tesla Stock?

In the long run, most experts see a bright future for Tesla. However, even if the company’s development pattern is positive, it won’t enjoy the same level of growth as it has in recent years.

This is true for most businesses, especially those in the technology sector. They expand swiftly initially, but eventually, their expansion is stifled by the influx of new rivals. However, experts agree that despite Tesla’s slower growth, it is still in an excellent position to continue growing in the long run. Nevertheless, investors should brace for challenges if the company’s past is any indicator.

Tesla TSLA manufactures more electric vehicles than any other company. Using the success of the Model S and the Model X, the firm rose from infancy to international acclaim in a decade. In addition to the premium automotive industry, Tesla competes in the midsize car and crossover SUV markets with its Model 3 and Model Y platforms. Over the next several years, Tesla also expects to manufacture and market brand-new automobiles. Various vehicles, such as compact cars, midsize trucks, sports cars, and affordable SUVs, will be built on these platforms. As the market for electric vehicles (EVs) expands beyond its current niche to accommodate more consumers, Tesla plans to continue its reign as the industry leader.