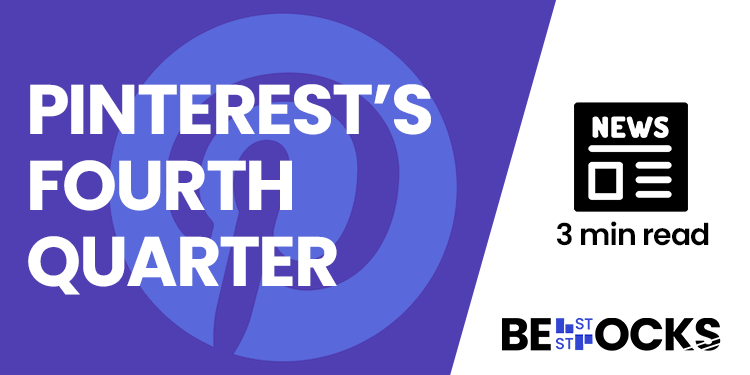 Pinterest’s revenue grew 20% year over year to $847 million, exceeding analyst projections of $827 million. The adjusted EBITDA for the period was $351 million. Pinterest Inc. stock jumped in premarket trade after the social media firm announced its fourth-quarter profitability above expectations.

In addition, it would increase its product and marketing initiatives to promote user engagement. However, during the regular session, shares lost ground, and some investors were concerned about the stock’s price. According to Wedbush Securities analyst Ygal Aronian, monthly active users decreased to 431 million, with 86 million in the United States, indicating how low the bar had been set for the company.

The social media platform has surged 11% premarket after beating Wall Street’s profit expectations by a wide margin. Unfortunately, however, shares also fell 10% in regular trading as concerns over how much money Pinterest is generating offset gains from recent acquisitions. That isn’t stopping investors from betting big on the stock, though—the company has seen a record number of new shareholders in Q4.

Is It a Good Time to Buy or Sell Pinterest Stock?

If you’re considering buying or selling Pinterest stock, then you should know that it’s not too late to do so. Pinterest is still a young website, and its overall market value is still relatively small. As of September 2017, its market value was just $30 billion.

To grow the value of the company’s shares and profits, you should assess how well the business is using the platform and consider how much time it will take before the social media site becomes popular among other users.

With the recent growth of Pinterest (PINS), the social media platform has become a popular website for many people to share their interests and hobbies. As soon as a particular site hits it big, investors tend to jump on board and start buying into their stock.